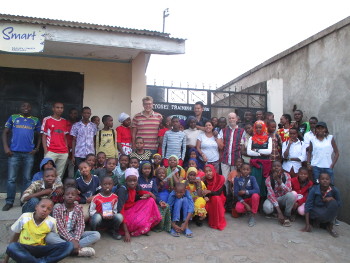 After three weeks of India (2013/14) and four weeks of Bali (2016/17), I (Georg) felt drawn to Africa and chose Tanzania (thanks to Julia for giving me this possibility and some first contacts). In Nov/Dec 2017, I traveled for four weeks to Arusha, being friendly welcomed by Steven Saning'o who offers hospitality and co-creation for people from all over the world. As volunteer, I was invited to support the Kyosei Training Centre, where an engaged team of teachers and volunteers is holding space for students besides the official schools. Steven also organized my 5 day safari (see pictures). Two teachers, two students, a volunteer from Kenia, and I had also a wonderful waterfall hiking trip (see pictures). And as a highlight, Steven traveled with me to Simanjiro and to a Maasai village, where I was invited to stay for nearly five days (see pictures).

It was hard to leave again - I grow fond of the people. And it was an extraordinary experience. Here is my dangerous question: Would you like to join me in such a traveling experience? I am thinking about offering it as a box expanding experience or even together with an Expand The Box Training. For now, I just would like to get some feedback if anybody out there is interested in such an offer. I'll appreciate if you contact me.